TCFA COWBOYS UP IN FRISCO 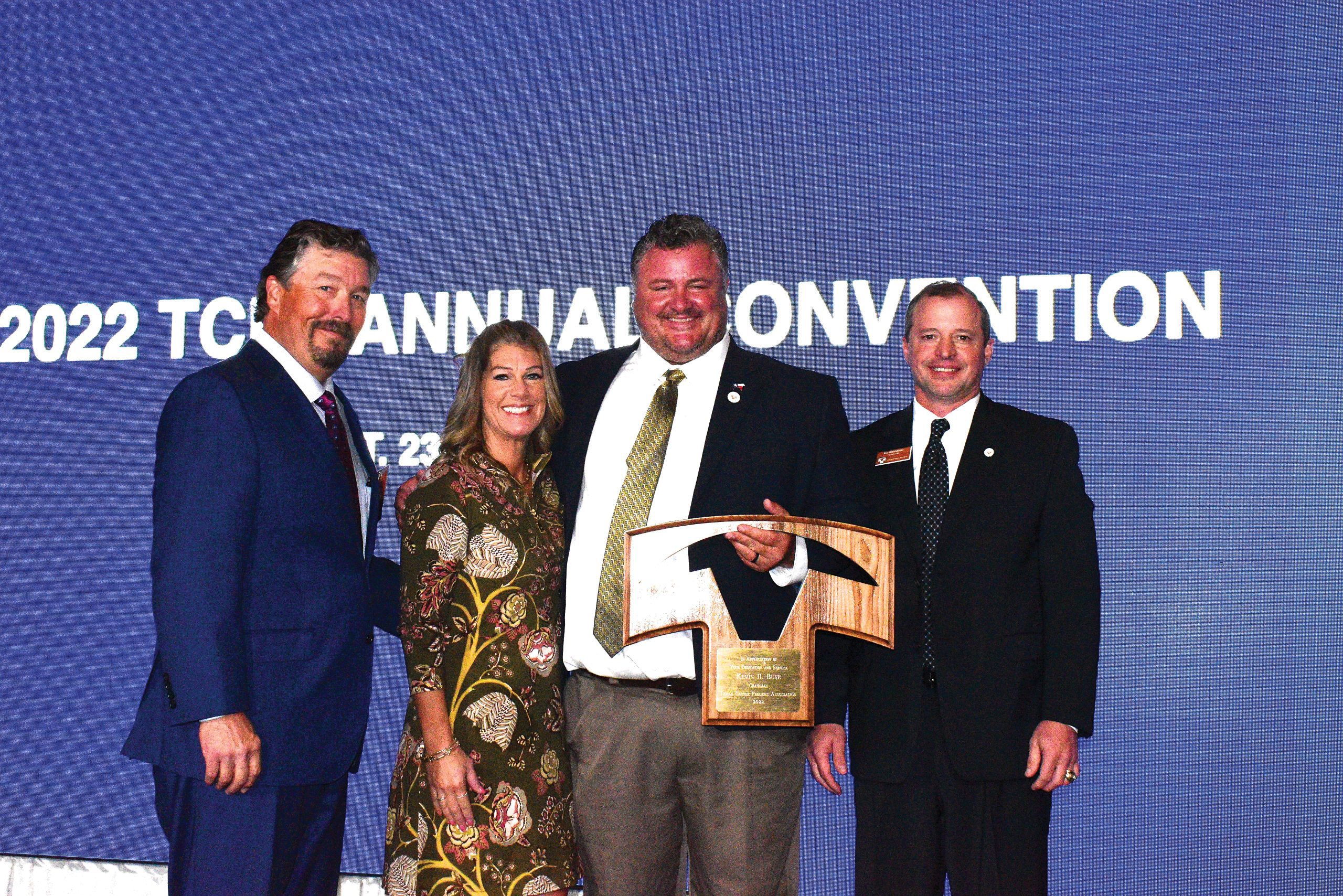 With Emmitt Smith on the program, it was apparent Texas Cattle Feeders Association (TCFA) was determined to score high at its 2022 Annual Convention in Frisco – right beside the Dallas Cowboys training facilities.

Even though Smith was one of the toughest running backs in his record-setting NFL career, he emphasized that teamwork with his Cowboy compadres helped create his success. Teamwork within the beef industry was also praised as reasons behind the continued high demand for quality beef among consumers here and abroad.

National Cattlemen’s Beef Association (NCBA) CEO Colin Woodall and Dan Halstrom, president of the U.S. Meat Export Federation (USMEF), were among other convention headliners. They hit on U.S. beef’s ability to sustainably produce more from less and market it worldwide, even during a COVID hangover and in poor economic conditions.

From fake meat to the Grassley-Fisher bill on mandatory negotiated cash trade, Woodall touched on several subjects that can impact beef producers and feeders. He said true-beef imposters, Beyond Beef and Impossible Beef, have found it tough to carve much demand among consumers.

“Beyond’s whole marketing campaign has been to run down beef,” Woodall said, noting that Beyond’s tens of millions of dollars in losses have been disastrous for the company. He added that consumers who have tried Beyond and other fake meat brands have not found anything near the flavors that come from beef.

The beef industry’s sustainability program is as prime as that of any other industry. “Since 1961, the amount of beef produced per head has increased by over 67 percent,” Woodall said. “We’ve done that while reducing emissions from producing a pound of beef by over 40 percent. We did this on our own. We need to factor in our sustainability in all of our discussions [on environmental and other policies].”

Despite the fact that producers and feeders take good care of their cattle, consumers remain concerned about animal welfare. Woodall said that tops a list of sustainability topics in consumer surveys, an indication that NCBA and other industry voices must continue educating consumers on how cattle are raised.

In other issues, questions regarding the ever-troubling Waters of the United States (WOTUS) won’t dry up under the Biden administration, he said, and it may be the U.S. Supreme Court that decides whether the measure will again threaten private property rights.

Through lobbying efforts by NCBA, TCFA and others, national transportation regulations remain favorable for livestock transport. NCBA hopes to obtain permanent changes in transportation laws to enable livestock hauling to be made safely and efficiently.

Woodall underlined the value of the Beef Checkoff. Its success is phenomenal. Checkoff-funded E-commerce promotions through Sam’s Club generated more than $11 million in incremental sales and a 13 percent increase in new buyers. Those sales provided a $24-plus return for every $1 spent in checkoff funds. A beef-marketing partnership with Kroger stores saw huge sales and a $64-plus return on checkoff assets spent. “That is the checkoff working for you,” Woodall said.

He explained that leading up to the Nov. 8 election, the controversial Cattle Price Discovery and Transparency Act remained bottled up in Congress. Opposed by NCBA and TCFA, the bill would require the major packers to conduct federally mandatory negotiated cash trade based on regional cattle production and marketing.

Outgoing TCFA Chairman Kevin Buse was part of a national committee that monitored voluntary negotiated cash trade. Voluntary cash trade percentages have increased for the Texas, Oklahoma and New Mexico region, which had been low due to the number of cattle traded based on quality grade and overall value.

“TCFA continues to be anti-mandatory negotiated cash trade,” he said. “A mandate on packers is a mandate on cattle feeders. We respect freedom. [Neither] I nor TCFA will tell producers how to market their cattle.”

“We’ve never seen beef demand as good as it is today,” USMEF’s Halstrom declared. He boasted that U.S. beef exports topped $10.4 billion in 2021 and will approach $12 billion for 2022. From January through August of this year, he said beef exports provided $471 for every head of fed cattle harvested, a 23 percent increase from 2021.

That’s a mouthful of beef products that foreign buyers gladly include in their diets. Korea continues to grow as a major buyer of U.S. beef. In 2022, it bought some $110 million in U.S. beef from January through August. USMEF worked closely with Korean retailers, including Costco, to market U.S. beef to consumers.

That’s not just for the non-muscle cuts, Halstrom noted. “U.S. beef roadshows with retailers highlighted Prime grade and the highest quality,” he said. “About 90 percent of the Korean Costco [foreign produced] beef is U.S. beef.”

Sam’s Club outlets in China have capitalized on large U.S. beef sales through online streaming campaigns – one of which attracted 70 million viewers in just a few hours. But Halstrom expressed concern over potential “headwinds” that could slow sales.

The international supply chain challenge could continue with the uncertainty of COVID’s long impact in the Far East. While China reported a GDP growth 3.4 percent, “I don’t buy it,” Halstrom said, calling to attention the long China shutdown due to COVID.

Other obstacles include worldwide inflation, labor, the strong U.S. dollar, shaky U.S. railroad contracts and U.S. longshoreman union squabbles. Mexico has been slower in coming out of COVID shutdown, but sales are picking up. Japanese beef purchases should continue to thrive because of “revenge spending,” which is being seen in other countries, Halstrom said.

“The Japanese have a high savings rate. They can afford quality beef. And they were among consumers who wanted to get out after COVID.”

Pippa Malmgren, a geo-political authority and former staffer for President George W. Bush, examined the futuristic aims of China and Russia, and how America’s ability to produce quality food will keep it as a leader in world power.

In new globalization, “the U.S. is now the cheapest place for manufacturing,” she said. “The U.S. is more innovative than anyone in the world. China needs what the U.S. makes. They don’t have enough water and other resources to grow their food.” She added that many countries “see a need for more food diplomacy.”

Concerns about China and Russia stretch beyond the Ukraine war and the threat against Taiwan. “Superpowers are fighting over who has power in space,” Malmgren said. “China and Russia are looking at destroying more of their satellites to create more ‘space junk’ to clog higher-altitude communication capabilities.”

She said parts of Africa are seeing a high rate of growth in technology. Silicon Valley companies are setting up offices in Rwanda. That’s among areas where African youth are taking their U.S. education from MIT and other institutions and “seeking to grow more with less,” Malmgren said.

These movements follow what Halstrom termed as a growing market for U.S. beef in Africa. “Keep your eye on Africa. They have the youngest demographics in the world,” he said.

Be Prepared for Your Moments

Emmitt Smith learned early that although he excelled in talent as a running back, he’d go nowhere without the blockers up front. As a first-round draft pick out of the University of Florida, he ended his NFL career having rushed for 18,355 yards. He remains the NFL’s all-time leading rusher and holds the record for career rushing touchdowns with 164.

During his talk to TCFA, he encouraged people in all types of industry to make the most of opportunities. “Be prepared for your moments,” he said. “When you get the opportunity to get in the game, make it count.”

Buse did that during his year of service as TCFA chairman. “Over the last several months, I’ve been able to witness the ability for individuals from all sectors of the industry to come together, share ideas and implement solutions to improve our industry,” he said.

“We, TCFA members, must be active in the work of TCFA and support NCBA and the great work being done on our behalf in Washington, D.C. We also need to support the Beef Checkoff and the fantastic work it does to promote our product to consumers not just here in America, but worldwide.”

Although he is big physically, his address to the convention included a few emotional pauses. Buse passionately described his respect, dedication and love for TCFA, its staff, its many members and most of all, his family. Many in the audience felt his passion. They, too, have devoted their lives to the beef industry, their communities and their families.

Buse drifted from his prepared remarks more than once. No one expected anything less. Buse quipped that one former chairman told him, “Kevin, don’t &%@# this up!”