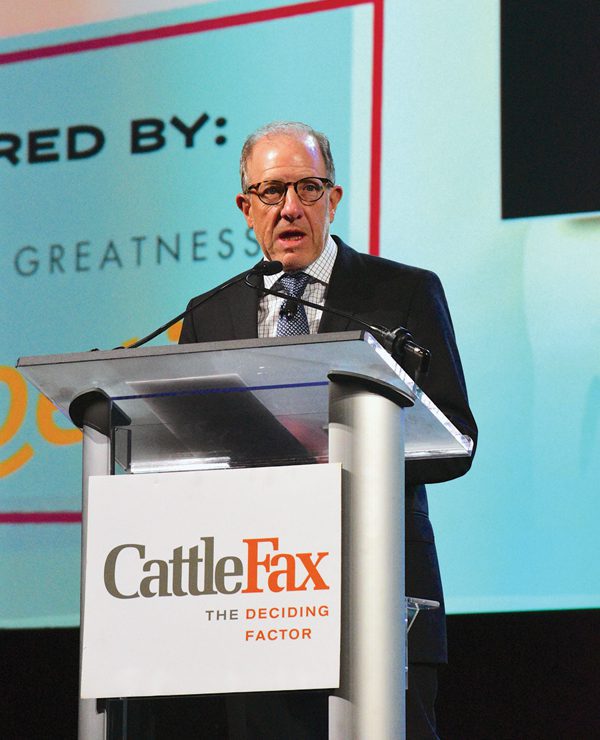 Many thought 2022 would be a return to normal. Surprise!

Indeed, while uncertainty is a given in the beef business, piling on seems like a bit much. Given that, however, here’s the weather and market outlooks from CattleFax, presented during the Cattle Industry Convention in early February.

First the weather, which may turn out to be the most certain aspect of a very uncertain year. Let’s start with the good news. “Very, very rarely has La Niña shown up for three seasons. We’re in number two,” said Matt Makins, the new CattleFax weather forecaster who stepped in for the retired Art Douglas, Ph.D. The last time we had a La Niña three-peat was in the early 2000s, he told beef producers.

La Niña and El Niño events depend on sea surface temperatures. Makins said the Pacific sea surface was very warm from north of Hawaii all the way to Southeast Asia. “That is warm water that will as some point be forced back across the East and replace La Niña with El Niño.”

Should that happen, that’s good news for parts of drought-stricken regions. In an El Niño, the Southwest and Gulf Coast are wetter than usual, while the northern United States is drier and warmer than usual.

Most weather models show a move to a more neutral pattern, Makins said, with one exception.

“Our American model, NOAA, predicts that La Niña hangs on and stays with us.” That means, by and large, what we’ve seen is what we’ll get, at least for this spring.

However, the summer forecast isn’t largely tied to either El Niño or La Niña, as those events tend to fade. “So for your summer, the Western U.S., very warm. Eastern U.S., fingers crossed we can keep your temperatures more tempered than last year. If you look at the precipitation map, there is a bit of monsoon moving into Southern Arizona, Southern California,” he said.

For the fall forecast, because the models show a trend toward neutrality, the weather should paint an even picture, he said. “We can begin to spread out moisture a little more judiciously. We can start to get water into Texas, southern New Mexico, Arizona. We can get water to the Pacific Northwest and we can continue it over the Northeast.”

The World at War

What that portends for the U.S. beef business remains to be seen. Perhaps, by the time you read this, the picture will be a bit clearer. But any grain prognostication is essentially impossible while the invasion continues.

Looking at the cattle market, however, it’s the input side that appears more at risk. Given that, here’s what Kevin Good, CattleFax’s most senior analyst, had to say.

Looking back, he said beef producers expanded the cattle herd by 6 million from 2014 to 2018. Then drought and prices brought on a 3-million-head liquidation the past three years.

“Unfortunately, as Matt laid out in the weather forecast, we probably are going to face another year of liquidation in 2022,” he told beef producers.

At the same time, consumer demand for beef was trending higher. Looking back, he said beef prices, both wholesale and retail, increased at twice the rate of inflation over the past 20 years.

“That means there’s more real dollars that have come into our business. During that same time frame, we’ve seen our share of the retail dollar go from 40 percent to 48 percent. We’re gaining market share. We’re producing a better product. We think the dollars are there and we’ll continue to see an upward track.”

That’s the good news. “But at the same time, we’ve got to recognize that we have a major headwind as we think about the drought cycle we’re in,” he said.

As this was written, around 60 percent of the country was dealing with some degree of drought. That means the all-time high of 65 percent set in 2012 could well be breached.

Thus, a scenario of forced liquidation in the face of higher prices across all sectors of the beef business will likely be 2022’s legacy.

That turn of the cattle cycle will return leverage to the production segment for perhaps three to four years as smaller calf crops come to fruition. For cattle feeders, however, those smaller calf crops will be augmented by the growing numbers of beef-on-dairy crosses. “That number is probably somewhere close to 3 million today out of the 9-plus million head of dairy cows. And it’s only going to get bigger as we go forward, in our opinion.”

Will that be enough to affect calf and yearling prices? Not likely. Here’s why. For beef producers in areas where it does rain, calf values will be high enough to encourage staying the course, if not expanding, Good said.

As cattle feeders entered the year, the feeder cattle supply outside of feedyards was down 700,000 head. What’s more, drought will encourage feeder cattle to continue to be pulled forward. That means the pace of feedyard placements will get tighter as spring melts into summer. In turn, that means tighter fed cattle supplies as the year draws to a close.

Beyond that, CattleFax predicts lighter harvest weights for both fed cattle and culls. Taking everything into account, the net-net is smaller beef production year over year of about 2.5 percent. What’s more, CattleFax predicts exports will be up 5 percent for the year, mostly because of demand in the Asian market. That puts further pressure on already-tightening wholesale and retail supplies.

Given that, here’s how CattleFax forecast cattle prices as of early February:

“Our suggestion for this year is basically a $140 per hundredweight fed market with the cutout at $280,” Good said. Should the cutout slide below that, it still leaves the packer with plenty of margin but pushes the average fed cattle price higher.

“From a seasonal standpoint this year, we would lay out the fed market this way,” he said. “We’ve been in the mid to upper $130s starting the year. We feel like we’ve got potential to go to the mid to upper $140s for the spring high.”

That may break 10 percent plus as the summer doldrums take hold. “That being the case, you would have to talk back somewhere into the mid if not lower $130s for summer low risk. And then your absolute high at the end of the year, somewhere between $150 and $155.”

Good said this seasonal pattern should hold true over the next couple years. “Last year, the peak was at the end of the year. This year and in the next two at least, we should have a fall high looking at the fed market, which does influence your seasonality of feeders and calves.”

The yearling market started in the upper $150s and should trend higher seasonally through spring into August, he predicted. “September typically is your peak. But in these types of years, prices stay that stout if not get a little stouter as you go into late year, supported by the higher trend in the fed market,” he added.

So, with a forecast of a $172 average for feeder cattle, the low in the market has already been set. “By the time you get out to August on, you’ve got a feeder market that should be at $180 or better, which obviously will be very supportive to the calf market.”

In early February, the calf market for under 550-weight calves was close to $190. “We should be higher into the spring for green grass fever. Then typically, the track back down into the fall is not as severe in these types of years. If you’ve got a yearling market at $180 or better going through the fall, you should have very good support in the calf market at $200 as we go through the second half of the year, a level that should be very supportive to profitability for our industry.”

Then there’s the cow market, which started the year trading at the highest levels since 2016. For the first part of the year, CattleFax thinks the cow market will move from $66 to $72 per hundredweight. “As a reminder, the cow market bottomed back in 2018. All other classes of cattle bottomed in 2020. Grinds, hamburger demand is stouting up, and it’s lifted the cow market in an upward trend earlier than the other classes,” Good said.