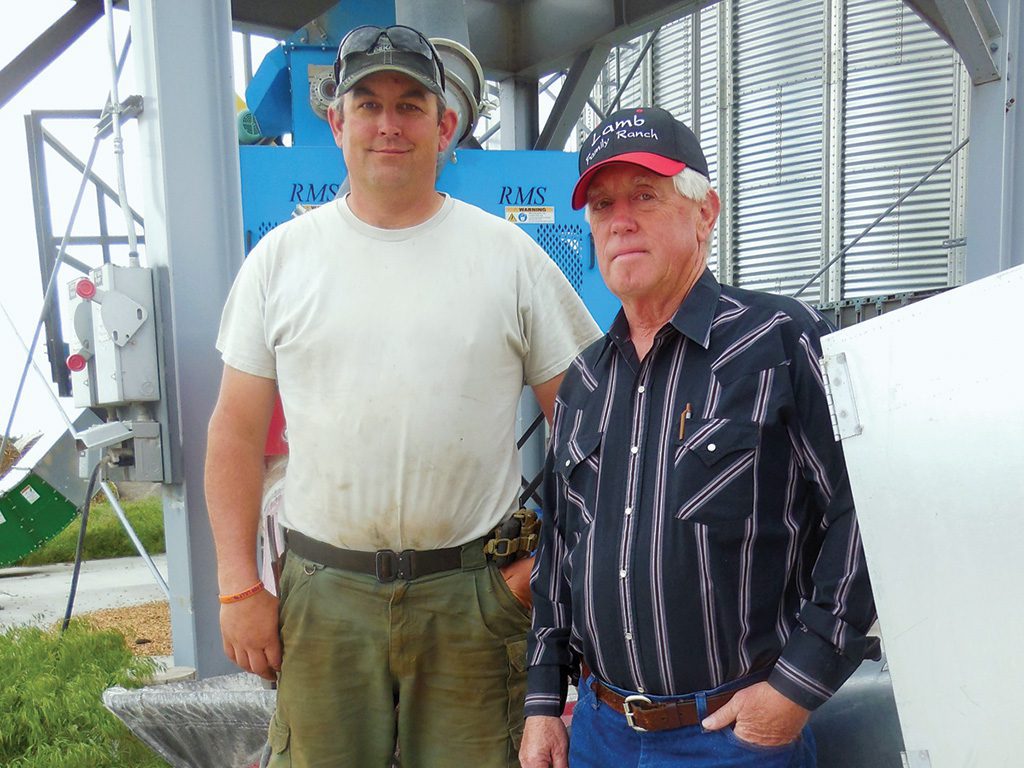 One outfit that’s mastered this skill is the Dave Lamb family of Anselmo, Neb. Allowing each family member to navigate their own course in life, they’ve managed to incorporate several entities into their sizeable operation – a cow-calf unit, grass yearling business, feedlot and farming operation.

How did they organize these integrated concerns under one umbrella? From mutual respect among family members and employees.

The Homestead Act of the late 1800s gave pioneers an opportunity to make a living on western Nebraska land. At 32 with seven children, Lamb’s maternal great-grandfather, Joseph Kellenbarger, moved his family from Iowa in 1883 to a Custer County homestead. Today, that land in the Dale Valley west of Merna, has been in the same family for over 130 years and five generations.

Dave Lamb’s father, Howard, grew up in Rock County, along the Niobrara River. That ranch, in the family for 100 years, is owned Dave’s sons, Jason and Rod.

We are going to pause for a moment and talk about Howard Lamb. Dave’s father became a strong and persistent leader in Nebraska politics. Likewise, he set an example of responsibility and fairness for his family. Dave describes his parents as being the source of the smooth generational transitions and open-minded recognition of individual abilities that has trickled down through the years.

Howard Lamb served in the Nebraska State Legislature from 1976 until 1992. His involvement in politics created a pivotal point in his son’s life. Dave graduated from the University of Nebraska in 1976, the year Howard was initially elected.

“I was driving home from college in Lincoln,” Dave says, “and Dad was driving to Lincoln from the farm. We passed on Highway 2.”  Howard went to the Nebraska Statehouse and Dave, age 22, took over the family operation. Although it was a big change, Dave always appreciates the opportunity he had to manage the farm. It worked out well. Howard Lamb passed away in 2015.

Family on the farm

Dave and Donalee have been married for 40 years. An integral part of the operation, Donalee handles all accounting and paperwork. She’s the one who makes sure all lines of communication stay open among team members. Her business office remains at home, were multitasking and quiet time to concentrate on numbers is essential.

The Lambs have two sons, Jason and Rod. Jason handles the farming and machinery maintenance. He likes new technology and the challenge of maximizing return on investment on every acre of ground saying, “It’s fun to drive a tractor.”

Jason purchases all crop inputs for corn and soybeans. He is married to Amber, and they have two daughters, Halsey and Lilly.

Rod loves livestock and manages the cow-calf operation. He and Jason currently own about 750 cows, run primarily on the ranch near Bassett. Additionally, he manages feedlot logistics, health and nutrition. He is instrumental in the grass cattle operation.

Dave, the senior partner, enjoys running yearling steers on grass. He is the principal calf buyer, driving to auction markets two to three days per week in the winter. He’s the marketing agent for the feedlot, does cattle hedging and deals with fat cattle buyers.

There are an additional four fulltime employees at the Lamb Farm. Summer may find, at a given time, as many as 11 people working at once. There’s a lot of time spent in the office board room with open discussion. Dave emphasizes the importance of family in keeping good relationships with their workers.

The cow herd is crossbred, blacks and reds. (The solid color pattern can also be seen in grass calves and feedlot steers.) Bulls are purchased from local seedstock producers. Cows calve mostly in April and are run on a low-input program; they are good at taking care of themselves. Calving ease and fleshing ability are important.

Dave started running yearling steers on grass at age 22. He enjoyed calving cows when he was younger, but tired of the hand chores. He’s made big strides in cattle handling and health strategy, enjoys sale barn buying trips and the flexibility of selling steers off grass or sending them to the feedlot. He says, at times, grass cattle can be a higher risk than cows, but high risk can bring large opportunities. The grass steers are run mostly in Custer County. “I like to see them grow,” he says.

The feedlot is a non-commercial family operation. They feed their own corn, and purchase forages. Cattle are almost all Nebraska-bred, run as grass yearlings or backgrounded on cornstalks. Chasing the Choice market, they feed primarily Angus and British crossbreds. Market-ready fats are shipped to JBS in Grand Island, Cargill in Schuyler or Tyson at Lexington. Cattle buyers troll the Lamb lots on a regular basis.

Health protocol for the large number of incoming cattle includes three to five days of rest for calves before being processed. There is no one “go to” drug used on sick calves. Each one is evaluated individually and treated accordingly. Lamb describes purchased, unweaned calves as being the biggest challenge; however, death loss at the Lamb farm remains consistently low.

What’s the concern? “Trade, overproduction and consumer perception,” Jason says.  Deception in advertising was also discussed. Dave emphasizes the different philosophy our urban counterparts have, saying we need to better understand them and communicate at their level.

The entire family continues to look for opportunities. They are open to expansion when the time is appropriate.