As you can tell from this issue of  CALF News, New Orleans was where it was happening for the cattle community recently at the Cattle Industry Convention and NCBA Trade Show. If you were at home dealing with the elements, CALF will get you caught up on the happenings. If you were there, we hope we had a chance to say hello. You’re sure to find someone you know as you read this issue. 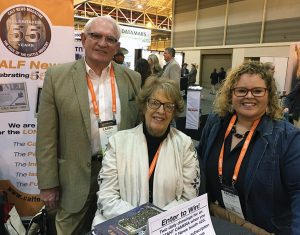 New Orleans hasn’t changed through the years, with its funky and elegant places to eat and an amazing mix of culture, but there are still scars on its infrastructure from Katrina. And every cabbie in town is depressed with the several thousand Uber drivers taking their business away.

The CALF News group arrived early for the Cattle Feeder’s Hall of Fame banquet on Tuesday night, and were entertained with the elegance, and good food and drink. The presentations were made to a full house where the irrepressible Bill Foxley and indomitable James Herring were inducted into the Feeder’s Hall of Fame. I had the honor of introducing Jim Odle of Superior Auction fame, who received the Industry Leadership award. Brian Price presented Jessie Ramirez with the Arturo Armendariz award, spotlighting his 36 years of service to Brookover Feedyard (see story on page 18). Be sure to vote for next year’s nominees and plan to attend the annual event in San Antonio next year.

Over 8,000 beef producers and allied industry attended the event where leaders were elected, business was conducted and vendors displayed their wares at a trade show spread over six acres. Among the awards presented at the National Cattlemen’s Beef Association Best of Beef Breakfast were Linda Davis, who received the Swan Leadership Award, and Temple Grandin, Ph.D., who received the BQA Educator Award. Olivia Willrett, daughter of CALF editor Larisa Willrett and husband, Jamie, was the overall winner of the CME Group Beef Industry Scholarship (see her winning essay on page 35). Much to my surprise and amazement, I was presented with the NCBA Lifetime Achievement Award, which was truly an honor.

On a personal level, as an almost “little old lady,” I have always known my feet would go first. I certainly wasn’t the only one who took extra shoes or boots to weather three days on concrete floors. On the third day, as I was talking to my brother, Fred, on the phone, wishing him a belated birthday, I retrieved my extra black flats from my suitcase. Turns out I had a pair of “Kenny’s” shoes – two left ones. Fast forward to Friday morning and the Best of Beef Breakfast. Donning my Liz Clayborn outfit, I gave up the fashion vs. comfort fight and wore my Arizona bright blue (and very comfortable) moccasins. Who was going to look at me anyway? So, when I look closely at the pictures taken of me receiving my achievement award, all I can focus on are my blue feet!

Meanwhile back on the ranch, I know it has been a winter for the ages for many of you who have been fighting ice, snow and mud. As we go to print, word of the floods across our cattle country is horrific. Damage to millions of acres of farmland and infrastructure in addition to losses of livestock, homes and businesses will, in the words of a Nebraska friend, “be an economic disaster, not just for us but for the whole state of Nebraska.” He had just driven 150 miles one way to get to his property, found five bridges across the Elkhorn down and was looking for ways to get feed to his animals. The Union Pacific main line was down, leaving ADM in Columbus down until the railroad is operating again. There are no words to convey our concern for those in the path of this life-changing event. As Jess Ebert, our national sales manager and Kansas livestock producer, says, “Enough already!”

We in agriculture recognize that every drop of moisture is precious, and the spring thaw will be a blessing. But I echo Jess’s sentiment. Enough already!

Winter even hit here in Arizona with a foot and a half of snow falling on Barb Jackson’s ranch south of Tucson. She and I even got into a few snowflakes traveling up to Wickenburg for the Cowgirl Cadillacs Horse Sale. Would you believe the flashing signs over the highway said, “It is illegal to stop on the highway and play in the snow”?

Held at Rancho de los Caballeras, a combination horse ranch and golf resort, the event was for only lady consigners. Fifty horses were sold to a standing-room-only crowd for a total of more than $850,000 with one horse alone going for $89,000. Needless to say, the event drew an ever-changing cavalcade of interesting people and beautiful horses. It’s on my calendar for next year. Meanwhile, spring is on the way. Keep the faith.

PrevPreviousNew Orleans – Something for Everyone
NextKane Has a New OwnerNext