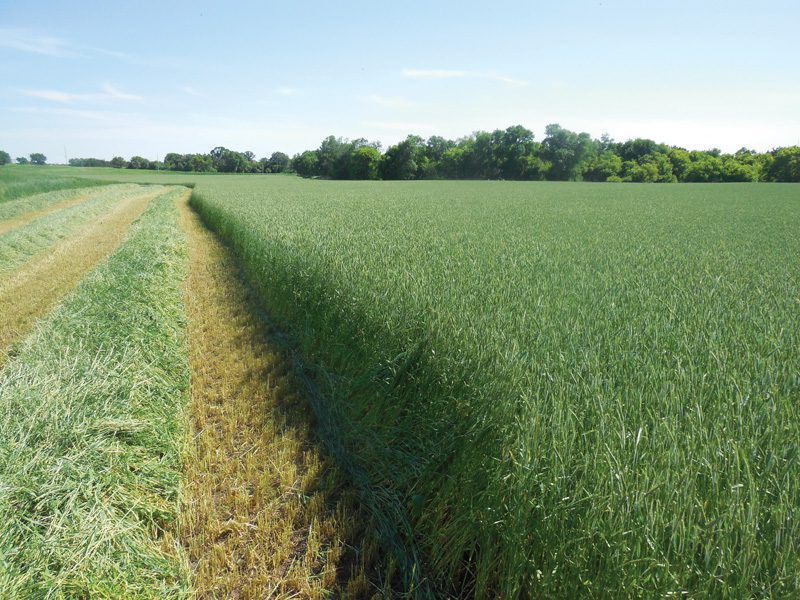 We live in an age where genetically modified organisms (GMOs) are rejected and roundly ridiculed by urban foodies. As a population, we need to step back and realize that genetic modification of plants and animals has been around for at least 150 years; maybe in a slightly different manner than we know, but modified, nonetheless.

More on the food purists, later.

Triticale, simply put, is a cross between wheat and rye. It has the hardiness of rye and the self-pollination traits of wheat. High in protein, it is fast becoming a staple in cattle diets across the world. This plant is a shining example of hybrid vigor.

Developed in 1875 in Scottish and German laboratories, its use spread quickly throughout Eastern Europe. Today, the leading world triticale producers are Poland, Germany, Belarus, France and Russia. More than 37 countries harvest the crop annually, which is a testament to environmental adaptability. Nearly all this cultivar is used as livestock feed.

Back at the lab, there are many different varieties of triticale being developed. At the most basic level, wheat is always used as the female parent and rye as pollen donor. Triticale has reproductive issues that demand expert handling to overcome (think of mules). To a layman, it is most easily understood as low fertility and shriveled seed.

When purchasing triticale seed, always go to a certified seed dealer; never harvest and use your own seed or buy off a neighbor’s field. It is interesting to note that invitro fertilization of triticale was used as early as 1925 in labs to improve the plant’s fertility issues. The chemical colchicine was also employed as a means of increasing germination. Many problems have been overcome in the practical production aspect of raising triticale – biotech labs are never complacent in improving crops.

What can you expect?

What do you need? This plant can likely fit the bill. Triticale makes an outstanding, grazeable cover crop. It also is an excellent stand-alone forage crop that you can hay or ensile. Short-season traits make it perfect for double cropping with beans or corn; it comes in both winter and spring varieties.

An additional advantage to triticale ground cover is the weed control that benefits the following crop. In addition, live plants build activity in soil profiles, improving, protecting and producing.

According to the University of Minnesota Department of Agronomy and Plant Genetics, analysis of forage and diet composition of dry matter puts triticale’s crude protein at 17.5 percent, compared with alfalfa’s 22.6 percent and oat’s 14.2 percent. Of importance, triticale has higher phosphorus numbers at .56, alfalfa comes in at .43 and oats at .39.

In a June 7, 2016, article in the Ohio Country Journal, cattleman Ben Parker said the nutritional value of triticale is “relatively the same” as many other forage crops. “It is the tonnage factor of the triticale” that puts it over the top as a valuable feedstuff.

Spring triticale, planted in early August and harvested in November, can yield up to 6,000 pounds of dry matter per acre. Winter varieties can be interseeded into old-stand alfalfa at a rate of 80 pounds per acre and harvested the following spring with the first-cutting hay. Even young stands of alfalfa can benefit with no ill effect by interseeding 50-60 pounds per acre triticale in the fall. Nitrogen fertilizer is always included, top dressed, when interseeding is done. It is recommended at 50 pounds per acre, applied in the spring. Alfalfa fields will not only yield more forage, the triticale protects against alfalfa lodging and leaf loss. Improved air circulation and weed control are also benefits.

According to Crop Quest Agronomic Services, triticale stands up well to grazing, weeds, diseases and cold weather. On the High Plains, it is virtually disease free. It will yield high tonnage when ensiled and is a more efficient feedstuff than corn, alfalfa or soybeans. It may require 12-16 inches of water to produce a crop. Being a one-year commitment, it adds flexibility to a farming operation. Fertilization requirements are similar to wheat. It will never volunteer like rye.

In an August 2016 article, American Agriculturalist offered some good advice. Germination rate of triticale seed depends upon how it was dried; spend more to buy good seed from a reputable dealer.

Figure on planting triticale 10-14 days before your local wheat planting dates. Earlier seeding maximizes tillering and increases yield; planting later at an increased seeding rate does not work. Early planting also gets the jump on weeds, potentially eliminating the need for a fall herbicide. Additionally, it reduces winterkill. Do you haul manure to your fields? Early planting of triticale makes an ideal place for incorporated manure applications. Drill your seed deep, 1.25 inches is recommended. Never broadcast.

Now, my own two cents

The reason for this Chuteside topic was prompted by our own satisfaction with the crop. We harvested winter triticale for the first time in 2018. It was planted in mid-September 2017 and harvested June 10, 2018, windrowed and baled. It yielded 4.5 tons per non-irrigated acre. We have more planted for 2019; it will be put up by the time this issue goes to print, and foxtail millet planted as a second crop on the same field. For the record, our fields were covered with floodwater in the March 2019 Bomb Cyclone for five days. When the water finally receded on Mud Creek, the triticale smiled and greened up. It is truly a miracle plant.

About the aforementioned food purists – since triticale grain is low in gluten, there is interest among health food stores  as a grain-based product, thinking it is a healthier choice than wheat. It proves a problem, however. Triticale is difficult to process or mill, not having the same qualities as grains higher in gluten. There is no such thing as triticale bread.

Also, it is impossible to think this stuff is not genetically modified, or at least majorly manipulated by man. It might be considered the first GMO. Tell that to a vegan food purist.

PrevPreviousU.S. Beef Trade with China Remains Small and Fights for a Foothold
NextCattle Marketing – Which Way Will Prices Go?Next